First woman to lead the PR Chamber of Commerce 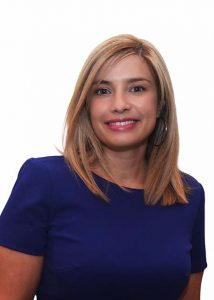 September 30, 2021, San Juan, Puerto Rico – The Puerto Rico Chamber of Commerce (CCPR) after 109 years of existence named the Lcda. Liza García Vélez as the first woman to occupy the Executive Directorate of the Institution, announced the Lcdo. Luis Gierbolini, president of the Camaristas, through a press release.

“As President of the organization, I presented yesterday to the Board of Directors the appointment of García Vélez, who for seven months has served as Director of Legal and Legislative Affairs. I am pleased that the directors after an evaluation of their merits unanimously approved the appointment of the new Executive Director of the CCPR,” said Gierbolini.

“I thank the President and each of the directors of the CCPR Board of Directors for the trust placed in me to direct the efforts of this historic institution from a commercial perspective, to advocate for causes that foster economic development and promote a business culture in Puerto Rico,” said the Lcda. Liza García Vélez.

At the same meeting, the nomination of the Lcda was approved. Margaret Ramírez Báez as First Vice President of the CCPR, who joins the Second Vice President, Teresita Santiago and Dr. Jeannette Vázquez, as Third Vice President. “I am very excited to be able to have for the first time in the first line of command of the Institution a group of professional women with different professional backgrounds to direct the efforts of the business sector in Puerto Rico from the CCPR,” concluded Gierbolini.

The Executive Director has been a lawyer, notary and licensed since 2008. Native of the town of Hatillo. He holds a Bachelor’s Degree in Communications from the School of Public Communication of the University of Puerto Rico, Río Piedras Campus. He completed his Juris Doctor at the Inter-American University of Puerto Rico. She holds a Master’s Degree in Communication with a specialty in Public Relations from the University of the Sacred Heart. He prepared his master’s project “The legal aspects in the use of social networks” at the European Business School Forum in Navarra, Spain.