PR Chamber of Commerce discusses priorities with the Energy Bureau 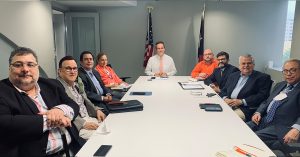 (San Juan, Puerto Rico – October 15, 2021) The Puerto Rico Chamber of Commerce (CCPR) met with the Energy Bureau to discuss the difficulties faced by merchants in Puerto Rico to maintain their businesses in the face of energy instability, explained the Lcdo. Luis Gierbolini, president of the Camaristas, through a press release.

“El Negociado is aware that Puerto Rico’s energy system is one of the biggest obstacles that the business sector has and within its powers as a regulator we will be monitoring the regulation of the energy transshipment mechanism for the interconnection of generators distributed to the electricity grid,” said Gierbolini.

In the meeting with the President of the Energy Bureau, Lcdo. Edison Avilés-Deliz and the Associate Commissioners the Lcdo. Ángel Rivera de la Cruz, Eng. Ferdinand Ramos and the Lcda. Sylvia B. Ugarte Araujo, also addressed the issue of advances in the use of renewable energy such as solar systems and natural gas.

“The CCPR as a non-profit organization and voice of private enterprise in Puerto Rico made itself available to the Bureau to establish alliances with state agencies or international associations specialized in energy, regulatory and renewable energy issues. We will be very attentive to comment and participate in the hearings to promote the stabilization of energy prices on the Island and collaborate with data and studies our position for the benefit of the business sector” concluded the Lcdo. Gierbolini.