President and Chairman of the Board of the Puerto Rico Chamber of Commerce (PRCC) – July 1, 2019 to June 30, 2020. Four years prior to his presidency,  Mr. Ledesma Fuentes has been a member of PRCC’s Board of Directors. He is also a member of the financial advisory firm Spectrum Group, LLC.

Mr. Ledesma is a certified financial analyst (CFA), with a track record of more than 25 years, prominently in the investment industry and the Financial Technology segment “FinTech”, for institutions such as Merrill Lynch and Smith Barney (Citigroup).

His areas of expertise are in financial and economic analysis, modeling, simulation, optimization, programming, structuring of financial products and application of emerging technologies.

Since 2003, he also leads Discover Puerto Rico LLC, a company with operations in Puerto Rico and Asia, to export, manufacture and distribute specialty coffee from Puerto Rico, among other products and services.

He holds a bachelor’s degree in business administration from Boston College, aside from being certificated in Diplomacy and International Relations from the Advanced Studies Center of Puerto Rico and the Caribbean.

His business commitment and social responsibility are proven by his participation in several non-profit entities as vice president of the Puerto Rico District Export Council (advisory board appointed by the Secretary of Commerce of the United States); AIESEC, Coffee Export Board, Alliance for the Development of Puerto Rico
and the International Relations Association.

In 2006, he founded and chaired (until 2010) the Special Committee on Asian Affairs; organizing the first trade mission between the Puerto Rico Chamber of Commerce, the China Chamber of Commerce, the Vice Minister of China Commerce and other government and private enterprises. He also presided for several years the PRCC Committee on International Trade and Foreign Investment, coordinating countless diplomatic visits for the Institution.

His goal, as President of the Puerto Rico Chamber of Commerce, was to bring an effective global approach where knowledge and efforts can be expanded internationally, leading the business sector to look “beyond our 100 x 35 miles”. 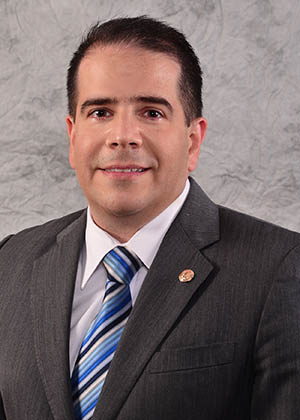